Mr. Baughman performed for six seasons with the Dubuque Colts Drum and Bugle Corps and after aging out served on the brass staff for several more seasons.  In 2017 he was inducted into the Colts Hall of Fame.

He is a two-time IRONMAN triathlon finisher and has numerous 70.3, Olympic and Sprint distance finishes.  Health and wellness are a major passion for him and he is proud to say that he has contributed to the active journey of many friends and family.  Mr. Baughman is married with two band kids of his own (trombone and saxophone).  Follow him on Twitter: @MrBAnkeny 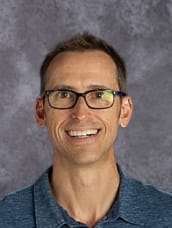